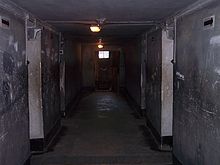 The BBC attached a camera to a drone and sent it over the greatest death factory the world has every known. The result is a haunting ride over abandoned buildings whose silence shout death from every board, brick and wire.

Click on the link below. Take the ride quietly. Think deeply. This is about who you are as a human being on the deepest level.

Recovered after 50 years in a box, Ruth Sidransky’s Reparations: A Novel of War and Rebirth is holocaust fiction that involves two young American Jews – a married couple – and their attempts at the end of the war to help the Jews of the forest and sewers. jews who survived the war hidden, starving, killing food with their bare hands. The writing is controlled, the rage fresh.

And when the killing was done, many Jews wanted only one thing: To begin remaking families – babies – their reparations for almost being wiped off the face of the planet.

To buy Sidransky’s masterwork about the holocaust, please click on the title above.