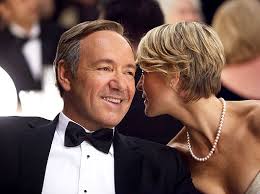 When Brian Williams got confused – or CONFABULATED EVENTS PUTTING HIMSElF IN THE OTHER HELICOPTER – I spent a lot of time thinking on the power of confabulation in story-telling. Granted, Brian Williams was the last person on earth that needed to story tell. But others, like me, do. And we can learn from him, ARTISTICALLY, not journalistically, which is a profession he shouldn’t practice anymore. Not in the way he was.

The horse is out of the barn and Brian can’t go back into the world of the real-believe. I suggest he write name-dropping, mea culpa books that big box publishing will LOVE to print.

The most fantastic confabulators I’ve seen lately is Netflix’s magnificent House of Cards. Benghazi becomes Claire’s bungling Russian subterfuge as the Ambassador to the UN. Frank’s jobs program is the flip side of Obama Care, a program repugnant – no, downright unpalatable – to political opponents.

And all the while, Frank’s isolation, control, and power-mongering grow, culminating in the most horrifying moment of CONFABULATION I have ever seen on the little screen: The President of the United States almost kisses his biographer – a man – in the family quarters of the White House.

Oh, General Petraeus, what hell hath you unleashed. I had never imagined this biographer thing before despite 30 years in the book business. It’s a ghastly image that you, alas, gave me.

Thoughts of gummed-shoed biographers tumbling nude into the beds of the powerful jumped into my head. Politicians. CEOs. Celebrities. Artists. Icons. And that biographer, one hair wrapped around his head – or, if female, crepe-soled shoes – feeling he or she is the power. I thought of Mary Ann giving Mrs. Clinton a big kiss. Elise and Tanya Tucker on the kitchen floor. Mary Ann again, peeping out from under Celo Green’s caftan, or me with a powerful Africa President. I hope none of us did a “Frank’s Biographer” move, though I can’t say about anyone besides me. I sure hope not.

This biographer thing is really skeeving me out. I’m not ready for Presidents’ kissing hired hacks that they mistake, momentarily, for beautiful mirrors. I’m sick of the narcissism that indicates they are not longer attached to the world, no longer flawed and human. As a ghostwriter, I am a toner down of self-promotion and rhetoric. I am a humanizer. Some like how their books turn out and some have a reaction like Frank. I do, however, always get paid.

So turn it down a notch, biographers. Your subject puts his or her pants on one leg at a time – or, in the case of Celo – only one head can go through the caftan hole at a time. Leave fan books for fans and write the grown-up stuff for us.