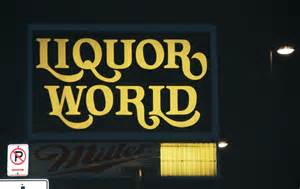 “That went well,” Rachel Rosenthalerheim said as Mary Ann drove her and Archie back to the train station.

“I thought it best to stop where we were,” Arch reported.

“Good call, Arch,” Rachel said as Mary Ann sat next to her, staring at the road ahead through the steering wheel, tears without beginning, end or sound on her face.

Rachel and Arch continued to talk back and forth as if she wasn’t there. She made it through two more stoplights before pulling into the parking lot of One World Liquors.

No one would mistake it for a holy spot but it’s where Mary Ann let rip her confession: “I beg both your forgiveness. I don’t know what’s wrong with me. I used to have control.”

“It’s beyond that. My rage is so complete that when I saw him, it had nowhere to go. I actually think about murdering him when I’m not thinking of fucking this black guy. That’s the only two thoughts I seem to have.”

As the words ‘fucking this black guy” filled out the interior of the car, a strange smell floated about. Mary Ann now added sound to her tears.

After several moments, Rachel spoke first, “in the city, interracial couples are becoming the norm. Many people on the subway, well, it is impossible to determine the color of their parents by looking at them. I myself have dated many men of color in my life: They are just attracted to me for some reason. Neither Arch nor I are surprised by your words.”

“Speak for yourself, Rachel. You have a shelf butt and more black man have dug you than all the trenches in Georgia. As you can see,” Arch turned to address the back of Mary Ann’s head,  I come from people who feel strongly about purity.”

“That’s what Hitler said,” Rachel said. “With that kind of white bullshit….”

“PLEASE. I can’t take it,” Mary Ann sobbed out. “You don’t think it feels weird to me to lust for the one thing my Mamma and Daddy taught me was the low-est form of lust a women could have?”

“Awk! Did you say ‘negro?” Arch yelled from the backseat. “Even I wouldn’t do that and I’m Hitler, apparently.”

“Look who is falling into an outdated vernacular,” Rachel said, staring at Mary Ann.

“Did you say ‘vernacular’ to me?” Mary Ann asked. “Who DOES THAT in the middle of an argument?”

“A lawyer with Vegas hair and a huge rear end, apparently” Arch said.

“Oh, so now my hair is on trial rather than my sex life,” yelled Rachel Rosenthalerheim.

“How did we get on hair?” Mary Ann asked, looking up and sniffing.

“Stupid discussion,” Rachel’s car voice had returned. “Look, I’m gonna pop in here so I’ll have my wine without having to go back out when I get to the city.”

“Good idea,” Arch agreed. “I’ll join you. I love a good blended scotch, a deeply unpopular idea among some of my clients. But there you have it. I’m the man of the people, I guess…”

Mary Ann was dumbfounded. She had just confessed to her legal team her most hidden, lurid thoughts and they had ended up gleefully shopping for cheap liquor just outside New York City.

The association Mary Ann didn’t quite make inside her mind that day was that the ‘negro part of town’ was now the ‘hood, and she was beginning to benefit from its ways.